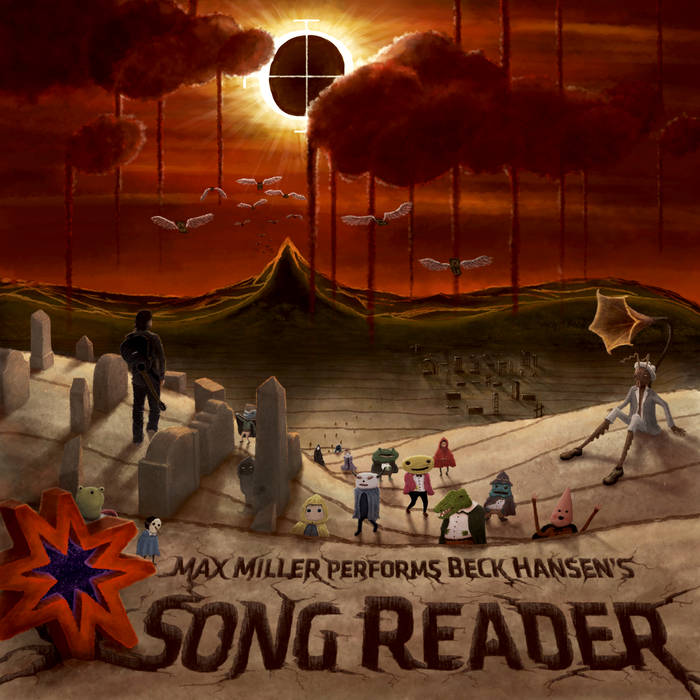 When Beck announced that he would be releasing his new album as a book of sheet music with no recordings, Max Miller went straight to work. By that evening he had read, programmed, and recorded the song, "Do We? We Do", releasing it online less than twelve hours after the project had been announced. In the days following, the track had been written about in Forbes, played on BBC Radio 6 Music, and even mentioned in an interview by Beck himself. Max saw the release of Song Reader as a personal challenge to step inside Beck's world- a world that has inspired him since writing his very first song, The Flylight Zone, when he was 9 years old.

Cutting himself off from the outside world and avoiding other people's interpretations, Max immersed himself in the sheet music. Losing himself in each song, he surfaced for air with a deep understanding and personal connection to the lyrics. Sometimes he stayed close to the sheet music. The previously mentioned "Do We? We Do" is a simple piano, guitar, and vocal arrangement. However, in other tracks, Max wasn't afraid to test his musical ingenuity, whether crafting the music from manipulated recordings of objects from his father's kitchen on "We All Wear Cloaks" or ignoring the sheet music entirely and basing the song just off of the concept on "Mutilation Rag".

The songs shift genre and definition from track to track. The stripped down acoustic take on "Sorry" is followed by the dubstep-opera inspired "Why Did You Make Me Care?", sung by the alluring Anna River. The album also features a bluesy duet with alliteration ally Rachael Roth on "Now That Your Dollar Bills Have Sprouted Wings", as well as a meeting of the minds from around the world, pondering the end of days on "The Last Polka." When you finally reach the album's massive closing track, "Last Night You Were A Dream", you may feel as if the album itself was a dream. With Max Miller Performs Beck Hansen's Song Reader, Max wants to take you on a journey. How far are you willing to go?

Music and Lyrics by Beck Hansen

Max Miller makes music. He wants you to listen to it.

You can change your mind like you're changing your clothes
Though you dress in rags and you turn up your nose
When it makes no sense, I will act like it does
And come to your defense though I have no weapons

Don't want the pretense of what love shouldn't be
It will bore you to death before setting you free
To be just as good or bad as you are
In the eye of a storm, we will both be sorry

Everyone's cruel at times
When you're not at your best
And you're crossing the line
I'll look past your mistakes
If you look past mine
And go stumbling past a gold mine
Track Name: I'm Down
I'm down and this town is a nuisance
It'll put your backbone all in ruin
With the area code of a truant
I'm fluent in the hazards of love

I'm down, I'm down and this town is a backdrop
A back road over a roadblock
With a debutante in a tanktop
Who's telling me how to be free

Like a prayer in a personal ad
Like a knife in a broken back
Learn to love what you can't get rid of
Before it gets rid of you
Track Name: Saint Dude
Saint Dude, you've come a long way from your solitude
Like a sage whose sooth with something crude
'Cause you know the truth is ugly, Saint Dude

Ascension Day, there's a plan skywriting out your name
The people stood and watched it blow away
'Cause nothing's good until it's gone away

You are ascending, no more pretending
Leave these earthly days
Your fable's tainted, pipe dreams are faded
Your revelations came too late
And you're a saint

In 2068, they'll keep a vigil burning in your name
With the gospel of a parking valet on the way
Apostles from a mall won't let you fall from grace

Now you're unloading your baggage
Floating on the Sea of Galilee
You walk on fodder, turn wine to water
Lay down your song at Peter's Gate
And you're a saint
Track Name: Do We? We Do
Do we ever want to take the low road?
Do we ever just want to say we're through?
Do we want to lock the door and throw away the key?
Do we? We do

Do we want to say it's just a fool's game
That no one but the wickedest can win?
And do we want to play it with our last dime?
Oh do we? We do

Do we wanna say that things are changing?
And they're only changing for the worse?
And do we want to drink while the ship's sinking?
Singing our lord's praises like a curse

Do we want the enemy's misfortunes
To rain down like a million rotten eggs?
Down upon the crown of creation?
Do we? We do
Track Name: Eyes That Say "I Love You"
When the night has gone cold and you're standing so alone
On the threshold of the rest of what you know
When the fever has died out, turned a flood to a drought
Left a chill inside that's growing like a ghost

Start again from the end, from beyond where you've been
You can't wash away your sins in shallow water
Cast a stone in a grave of the plans that you made
They only go as far as you can throw them

You'll come running with eyes that say 'I love you'
You'll be blind, so blind
And I won't know you, I won't see you
I won't need you, I won't love you anymore
Track Name: Now That Your Dollar Bills Have Sprouted Wings (feat. Rachael Roth)
I had fourteen dollars in my inside pocket
And twenty-two more up my sleeve
There was cold hard cash lining up my jacket
But I did not have a dime when I did leave

When I got here I was carrying roses
When I had to go, I was only holding dirt
Well I walked in here wearing a tuxedo
But I left wearing an old t-shirt

They say it's hard times, don't I know it
I'm sleeping on a bed made of nails
Well I used to live way up in the penthouse
Now I can't even get a room in the county jail

Watching all your coins roll down the gutter
And all your champagne going down the sink
Is there something that you're trying to remember?
Or is that string around your finger a wedding ring?

How can you fix something
That you can't touch without hurting?
The lesson you've learned is leaving you dumb
Please leave a light on when it's done

How can you see the ending
When you're lost at the beginning?
The day hides all that the night left behind
Please turn a light on when it dies
Track Name: Rough on Rats
Your crawfish fingers and your dirty dregs
Your sideways stingers and your wooden legs
They're throwing out jewels like rotten eggs
'Cause it's Christmas in Siam
And we're rough on rats

So what do you think you could take from the heap
Where the haystack needles are piled up cheap?
You can buy what's useless and steal what you need
In the pink penitentiary
And we're rough on rats
Track Name: Old Shanghai
When you're walking in old Shanghai
Lanterns under the night sky
See the moon begin to rise
Just like it did back home

With no ties, with no plan
Your last dollar in your hands
Take a picture and send it back
To someone you used to know

Things will always find their way
From the backroads to the bay
There's more to life than you or I will ever say
In old Shanghai
Track Name: Sorry
I've been hanging around again
Hang my head on the ground again
Turn my face to the wall
Turn my head to the wall

I've been walking around again
Tongued tied over the town again
Stranded out in the hall
Thrown right over the wall
Track Name: Why Did You Make Me Care? (feat. Anna River)
Why did you make me care?
Make me want you there
Leave my arms both bare
And break my defenses

How did you make me feel
Like I couldn't feel
What I thought was real
Was one step from senseless?

Why did you make me need
What could only bleed
Just a heart you feed
With some pretty poison?

Where should I keep these tears
In a thousand years
Will they disappear
Or be an ocean?

Time falls asleep
While I'm trying
To keep from crying
Over all the lies
That you told
While I could have almost died
And drained down the dregs
Of you
Track Name: Heaven's Ladder
Look up heaven's ladder
Watch the angels climb down
As if they knew what was the matter
With those down on the ground
Oblivious to danger
Those who walk up on the clouds
They'll tumble down, down on the ground
Where there's nowhere else to go

And now you know that there's nowhere else to go
But only further down into the hole
You could see the whole world
Down below, down below, down below
Heaven's ladder, it only goes
As far as nowhere and then
You're on your own
Track Name: America, Here's My Boy
He came into this world, helpless and unformed
I held him in my arms as he lay newly born
I said I would protect him and soothed him with my voice
America, here's my boy

I taught him to say words and stand up on his feet
I held his tiny hand as we crossed the street
I told him that his days should be sown with joy
America, here's my boy

We watched them play soldiers out on the schoolyard
Pretending that the enemy was nothing like we are
With glory for the hero whose weapon's just a toy
America, here's my boy

The wolf is on the hill
The baby's in the briar
The worm is on the rose
And your word is on the wire
Track Name: Title Of This Song
You've taken the title of this song
From a life that's beyond
Something that you could belong to
But is it wrong to sing along
When all of the words
They just get on your nerves
And the verse is ringing out like a curse

You've taken the title of this song
From a book that goes on and on
'Til you can't find the ending
Was it a funeral or a wedding?
Or a seance for the bride
Whose affection had died?
Though some say love is suicide
My heart it don't make any sense
Was all that she said
When her love was found dead
But the story was all in her head

Bandcamp Daily  your guide to the world of Bandcamp